The image of the month is a false-colored secondary electron (SE) image of the mouth parts of a tick, taken using a Scanning Electron Microscope (SEM). The subject is most likely a male deer tick (shown below in the black-and-white SE image), commonly found in Massachusetts and across the northeast – and a prime carrier of the bacteria that causes Lyme disease, Borrelia burgdorferi (B. burgdorferi).

In February of 2016, the Centers for Disease Control announced that a new species of this bacteria, B. mayonii also causes Lyme in people. And now a new tick-borne virus that is on the rise – Pawassan – was a recent topic of discussion on National Public Radio’s On Point program. Pawassan can cause paralysis and death in humans, representing a new threat in what has been described as the worst year for ticks in recent history – largely because of the wet conditions nationwide over the winter and spring. 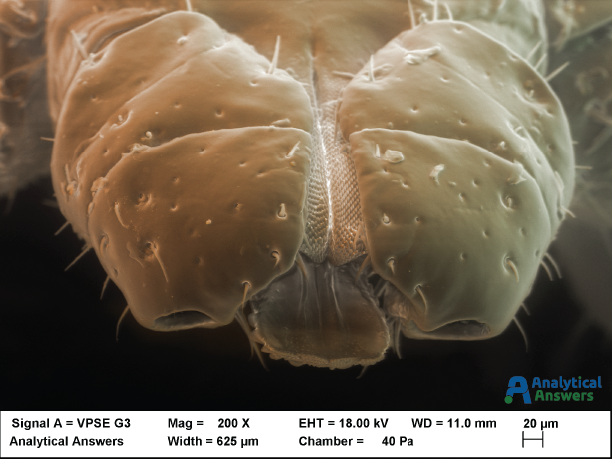 The false-coloring was collected by acquiring multiple images using a solid state backscatter detector that allows the user to select specific parts of the detector for image acquisition. Using an image processing program, colors can be assigned to specific images that are then combined to produce a natural-looking color scheme. Both the false-color and ‘normal’ images were collected using special lower-vacuum conditions to avoid drying and other artifacts that occur under the normal high-vacuum environment of the SEM.